Irven Thomas Kuykendall disappeared three and a half years ago at the age of 79. In spite of his age he had a LinkedIn, and the details of his accomplishments, as told by Kuykendall himself, are touching:

When I went into the ophans home, 1-3-1942, I wasn’t made to go to school.. I had rather helped with the care of the livestock, cows, horses, mules, hogs goats, chickens. All except the horses and mules, were slaughted for food. Left there in 1-31-1953. Went into the Army. In those years, a person only had to be in excellent [health] and make a score of 31 on the entrance test. Today, a person has to be in excellent health and a high school graduate. I stayed in the Militery, intil 12-8-61. In 1986, while I was a patient at the V A Hospital, I took the test for GED and passed it on 2nd try.

R.I.P. Irven, wherever you are.

I’ve decided to add a bunch of super-old cases to Charley today, beginning with Ida Mae Lee, who disappeared in 1956. She was working at a hotel at Grand Canyon National Park at the time.

Anyway, I went to Newspapers.com and searched for the phrase “Ida Mae Lee” Arizona and found some interesting results: 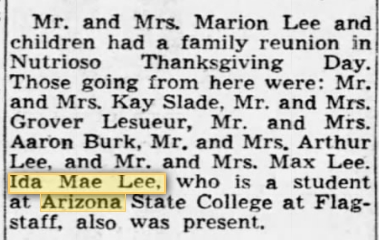 (There were several other mentions of Ida Mae Lee attending Arizona State; an October 1953 article says she lived in Nutrioso, which has a current population of 26. There’s also articles from January and March name Ida Mae Lee among the honor roll students at Round Valley High School, which is in Eager, Arizona, a 21-minute drive from Nutrioso. And in 1952, Ida Mae Lee and some of her fellow Round Valley HS students staged a fashion show.)

I’m pretty sure the Ida Mae Lee who married Mr. Jones is the same one that attended Round Valley High School and Arizona State; note the reference to Nutrioso in the marriage announcement. And I think that photo looks an awful lot like NamUs’s picture of the Ida Mae Lee who vanished in 1956 — though I’m not prepared to swear to that, I am not good at all at identifying faces.

So, the 64k question then, assuming all these Ida Lees are in fact the same person: what happened to Mr. Jones during the 14 months before Ida vanished? The fact that she’s listed as missing under her maiden name suggests they were separated or divorced by then.

I did find this obit for a Niles Lee Jones who died in Mesa, Arizona in 2011, age 76. No mention of any survivors, but a search of addresses for Mr. Jones mentions Nutrioso, Arizona as well as other cities.

I have written several times about coming across traces of a missing person online from before they became missing. It’s an eerie feeling.

This popped up in one of the recent Virginia cases I added. I found a comment the missing man wrote on a blog post just a few months before his disappearance; he complained that his daughter had made false claims about him in court and gotten a restraining order against him for no reason.

Today I was grabbing random cases off of Charley to add to its Twitter feed — I’m stored up for the rest of the month, and even if I get run over by a bus the Tweets will go up automatically — and came across Alex Talosig, one of my “few details are available” cases. He’s on the CDOJ database but not NamUs and I’ve got nothing on his disappearance.

So I Googled him. And, although I still have nothing on his disappearance, I found out Alex seems to have attended Ohlone College in the spring of 2012, two and a half years before his November 2014 disappearance, and he’s quoted in their campus newspaper in an article about the school’s Health Fair. Ohlone College is a community college in Fremont, California, half an hour’s drive from Santa Clara, where my Alex Talosig disappeared from, so I’m reasonably sure the Alex Talsoig in the article is the same guy:

Student Alex Talosig enjoyed the abundant amount of information through handouts. “I did not know about the services but a lot does not pertain to me,” said Talosig.

He has been to the Ohlone College Health Center and used its services.

“They helped me get medication because I’m from a low income family,” said Talosig. “The health center does a lot to give help to students.”

I found a few Facebook profiles for people by that name and one of them looks like it could be my Alex. That profile hasn’t been updated since 2013, before my Alex disappeared. The only clear photo that’s publicly viewable looks a bit like my Alex, but I’m not sure; he’s wearing sunglasses in the picture and the angle isn’t great.

So what happened to you, Alex? Where have you been for the past 22 months? I hope you’re all right.

I’m working right now on purging runaway cases — and there are a TON of them that have to go — and saw Alishia Dachone Miller‘s case. She disappeared from Detroit in 1989, aged just thirteen, and she is, or was, classified as a runaway. Given how almost 30 years have passed, I don’t know whether the cops still find the runaway theory credible. Alishia is not on the NCMEC anymore, but I am pretty sure she’s still missing. (Not 100% sure though; let me know if she has in fact been found so I can remove her from Charley.)

The age is slightly off — Alishia would have been twelve at that time of the accident, not thirteen — but I’m pretty sure this is her. Another article about this event gave details about the injuries the survivors sustained. Alishia got off relatively lightly, just bruised. Another child who was hit broke his hand; another had to be hospitalized overnight and was listed as being in “fair” condition with leg, arm and head injuries. And, of course, a thirteen-year-old boy died.

None of this is of any use as far as shedding any light on Alishia’s disappearance, but I find it interesting nevertheless.

As I have said, I’m plugging Charley Project names into the Newspapers.com database, looking for info. I’m doing it in reverse chronological order. I don’t have a lot of time — I only have a seven-day free trial and a paid subscription is pretty expensive.

Reading all those older papers gives you a really good idea as to how much America has changed just in these past several decades. Like, I keep getting weirded out by all these married women being introduced as “Mrs. Husband’s Name.” Another example — a shocker, from the current post-HIPAA perspective — is something I just discovered: in the now-defunct Franklin News-Herald, a Pennsylvania paper, their edition for February 10, 1972 included a list of recent hospital admits with the admitted person’s name and the name of the street they lived on and, in some cases, their full street address. Any American newspaper that somehow obtained and published such information nowadays would be sued into oblivion.

One of those admits was Patricia Jane Seelbaugh. This would have been just two weeks prior to her 16th birthday. Patricia disappeared without a trace in October 1973, one year and eight months after her admission to Bashline Hospital (now the Grove City Medical Center). She had been admitted to Bashline at least once before, in late July of 1969. No idea on what for. Nothing about her actual disappearance, alas. “Few details are available.”

I have written before about the pre-disappearance online presence of MPs. I just found another, while researching Steven Jones’s case (they’ve found the motorcycle, but not, apparently, his body). I’m quite sure that he’s the same Steven Jones who got sued six years ago because of some comments he posted on the internet. The place is right, the age is right, and my Steven Jones was apparently outspoken, just like the Steven Jones who posted the online comments.

Of course this has nothing to do with anything. I’m just throwing that tidbit out there.

With more recent cases, I occasionally find traces of a person’s activities on the internet before they disappeared. One college student had a website with some pictures of her and poems, one of which she wrote just a few days before she vanished. Another person, a middle-aged man, wrote somewhere about his experiences volunteering for the Peace Corps in the 1970s. Etc.

Well, I just found an online trace of an MP who is most definitely NOT recent: Bessie Hyde, who disappeared on a rafting trip in Arizona over eighty years ago. Northern Arizona University’s digitial archive has a book of poems Bessie wrote, called Wandering Leaves. You can not just read the text but actually see the book itself, bound with string. It’s typed but the cover has the title in what is presumably Bessie’s handwriting. From page 4:

The first fall frost
In shining silver,
Comes out at night.

And soon beguiles
The fluttering trees,
With jewels.

At dawn…
The barren ground
Is carpeted with brown,
Dry, crackling leaves:
Who can no longer whisper
Soft, low songs
For they–
Are dead.

I always wondered why people made such a fuss about the beauty of autumn. The whole season is about death. Apparently Bessie shared my sentiments.