This week’s featured missing person is Elizabeth Kovalik, a 28-year-old woman who disappeared from Milford, Connecticut in 1987. The night of her disappearance, she went out to a bar, where she was seen with two men. An acquaintance claims he dropped her off at home afterwards. She has never been heard from again and wasn’t reported missing for a week.

For what it’s worth, Elizabeth was “acting oddly” prior to her disappearance. Me, I wonder how closely the cops questioned the man she left the bar with.

She was featured in a Connecticut Magazine article in 2012.

In honor of Asian Pacific American Heritage Month, I am profiling one Asian or Pacific Islander MP for every day of the month of May. Today’s case is Felita Ruark, who disappeared from Madison, Georgia on June 24, 1990, the day before her 27th birthday.

The circumstances of Felita’s disappearance are unclear: she was supposedly going to meet up with her soon-to-be-ex-husband in Jackson, Mississippi, where he lived. That’s more than a six-hour drive. But her husband says he never saw her or even had plans to see her. Shrug.

Her car later turned up at the Madison Wal-Mart, meaning that if she did plan to go to Jackson, she probably never even made it out of town. That doesn’t look good at all.

I couldn’t find anything about Felita’s disappearance on Newspapers.com, but I did find this from the Yazoo Herald, a Mississippi paper, printed on February 24, 1990, exactly four months before her disappearance: 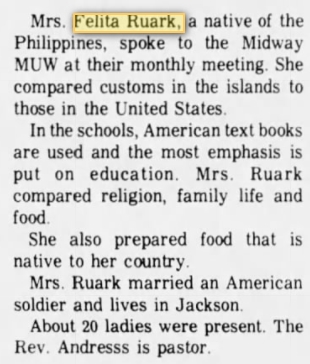 I’m quite sure it’s the same Felita. The name isn’t exactly common, and as I previously noted, the missing woman’s husband lived in Jackson.