Yeah, still feeling horrible. The night before last, after I completed the previous entry, I was sick many times. I finally fell asleep around five a.m. and woke up in the early afternoon to the feeling of a large fluffy cat named Carmen lying on my back making biscuits and purring. I’m just going to say she knew I was sick and felt sorry for me, and not that she was trying to wake me up because I hadn’t fed them at ten a.m. like I usually do.

Carmen had mostly been ignoring me all week but Aria has been very snuggly, lying on top of me purring and licking my hands. I took this picture of her the other night. 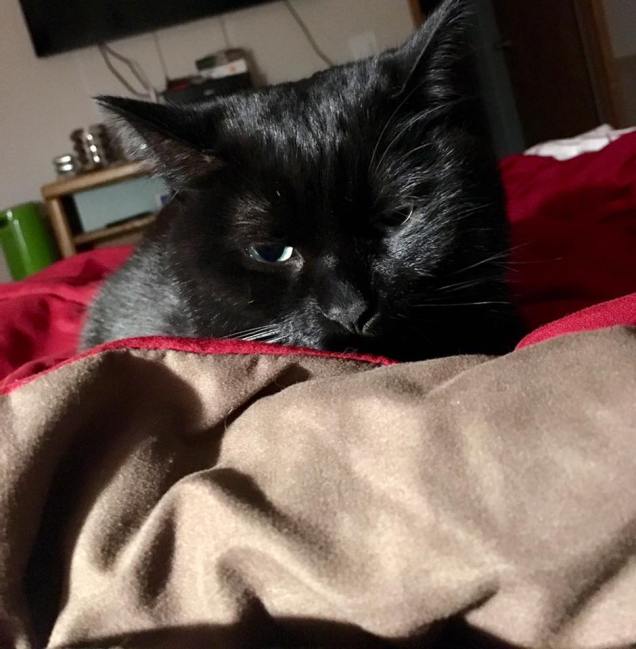 I stayed in bed all day yesterday, except to go to the bathroom and feed the cats, but I didn’t get sick again. Today I decided to get up, on the idea that I’m on the mend and the main reason I feel horrible now is that I’ve been lying in bed since Tuesday drinking almost nothing and eating even less and not showering or anything. Wednesday Michael made me a cup of chicken noodle soup, but I could only have like five spoonfuls and couldn’t keep it down. Last night he came home with Saltines for me and I had two. That’s the only actual food I’ve had since Monday.

So I’ve taken a shower, which felt good — I had felt really gross and icky — and now I’m sitting at my computer. My back still hurts and frankly the Tylenol 3 is not helping. Maybe if I stay out of bed it will stop hurting. Now that I’m up and not so smelly, Carmen has started meowing at me and rubbing herself against me again. I’m going to try a few more Saltine crackers.

Tuesday morning Dad called me and announced he’d gone out and bought me a car. I can pay him back with the insurance settlement. (I haven’t been able to talk to the insurance company this week due to my illness but I’ve got a bone to pick with them: they offered something like $100 for the inconvenience of me being without a ride for ELEVEN days, and NOTHING for the pain and suffering.) I had wanted to go car shopping with him and seek feedback from friends and stuff, but his selection sounds really nice: a 2006 Cobalt, half the age of my poor Buick. He says it’s orange, meaning it’ll be difficult to lose in a parking lot, LOL.

This afternoon he’ll drive the car over. I’ll have to drive him back to his apartment and then return on my own, a three-hour round trip. So you see why I needed to get my butt out of bed.

But if I keep improving I daresay I’ll be able to resume duties tomorrow. As for Ed’s podcast, it’s coming out next week.