This is one of those entries about my personal life and stuff. So if you don’t care, don’t read it.

I might be going to Minneapolis in the first week of July. My brother lives there now, and Mom is going with her boyfriend to see him, and she said I could come too. What I’m really interested in is my friend John, whom I’ve mentioned a few times over the years. John and I met at college and we haven’t actually seen each other in ten years, but we keep in touch by phone. Well, he just moved to Minnesota.

I sent John a text asking exactly where in Minnesota he’d moved to, thinking if it was the Twin Cities area I could visit him. Then, after some reflection, I thought the better of it: John got married only a few months ago, he only just moved to Minnesota, and he’s still looking for a job. It didn’t seem like a good time to be visiting, so I decided not to bring it up at all. But John sent me a reply saying he was in Minneapolis and if I ever wanted to visit, he’d love to see me.

So we’ll see if I can arrange it. John has been a wonderful friend to me over the years. I also really admire him. He graduated from college with honors (majoring in history, like me), and went on to go to China for a year, learn Chinese, get a master’s degree in East Asian Studies from a British university, and graduate from a top twenty ranked law school. And now he’s changed his mind about going into law and wants to become a doctor instead. Which means, basically, starting over from scratch, learning all the science he needs to get a good MCAT score, possibly getting a whole new bachelor’s degree, then going to medical school. But I am sure he can do it.

I frankly feel pretty useless when comparing myself to John. I know that I have disadvantages he doesn’t have — John’s family is much richer than mine, he’s not on the autism spectrum, he didn’t suffer from severe mental illness throughout his adolescence and young adulthood (illness that didn’t get diagnosed till I was 23 and didn’t get properly under control for years after that), he wasn’t a victim of sexual assault, etc etc etc. But I know that part of the reason I haven’t achieved as much as John is due to personal failings.

I mean, take the Charley Project, which I absolutely love working on and am really good at. Basically it’s the only significant thing in my life that I haven’t failed at. I don’t work on it consistently though, as you all well know. If the Charley Project was a company and I had a boss, I would have been fired long ago for slacking off. “You’re a wonderful researcher and writer,” I can imagine my boss saying, “but a terrible employee.”

I’ve talked to my therapist about my feelings of inferiority when comparing myself to John, and he said, “Do you want to go to China?”

Anyway. I hope to be able to see him.

Michael and I are doing well. Last night we went out to this awesome restaurant with a friend, celebrating her birthday. Afterwards we (sans friend, who had to get up early for work) watched a late evening showing of Finding Dory. It was great; Pixar hasn’t made a bad movie yet. The stuff at the end with the seashell trails reminded me so much of the real-life parents of MPs I write about. One mother I know of, for eighteen years until her apartment building was torn down, slept on the living room couch every night instead of in her bedroom so she wouldn’t miss it if her daughter knocked on their door in the middle of the night. And a lot of parents or other relatives keep the same phone numbers and/or never change residences, just in case their kid comes home.

Only one other thing to report at present. I’ve mentioned before that I have melasma, a skin condition. As far as skin conditions go it’s not the worst: no itching, burning, blistering, etc. Just skin discoloration, and it’s not disfiguring or anything. But it’s very difficult and expensive to treat, and it’s on my face: across my forehead, around my eyes and around my mouth. Everyone else says they can’t see if but I sure can, every time I look in the mirror. I really wish I didn’t have it. Sometimes I look at older pictures from several years ago, pre-melasma, and look at the wonderful even skin tone I used to have, and feel sad.

Today, kind of on the spur of the moment, I went to one of those makeup places at the mall to see what could be done. I haven’t worn makeup at all, that I can remember, since I was fourteen years old. That was one time, for my sister’s wedding, and I was a bridesmaid and she more or less made me do it. So I had no idea what I needed or how to use the products. I explained this to the lady there: I was almost a makeup virgin, and I didn’t want any “MAKEUP makeup” but just something to make my skin tone even again. She went to work and the results were great, I think. I bought the stuff she recommended. I was a bit horrified when I found out the price, but she had already put my makeup on, and it looked so good, I decided to swallow the stone and buy it.

This is a picture of me I took this morning, before my trip to the mall. The melasma is pretty obvious, I think: 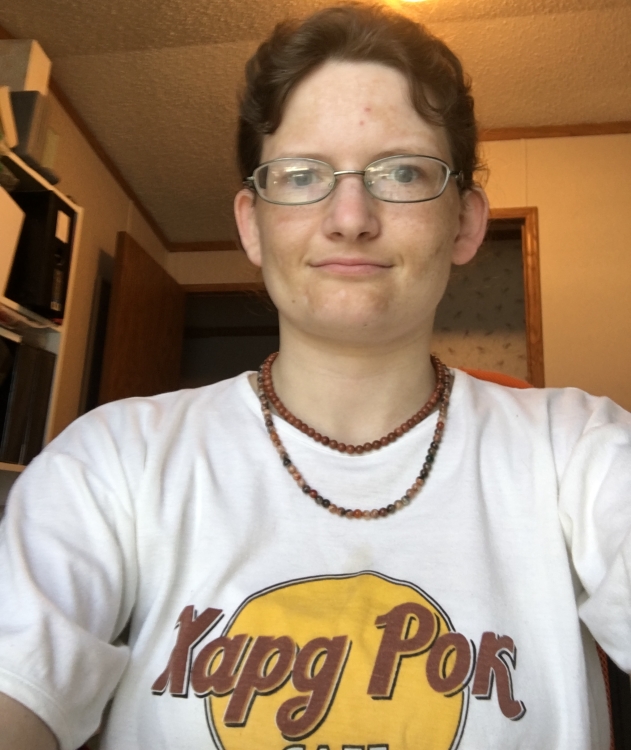 And here’s two pictures Michael took of me this afternoon after I got home, wearing my new makeup: 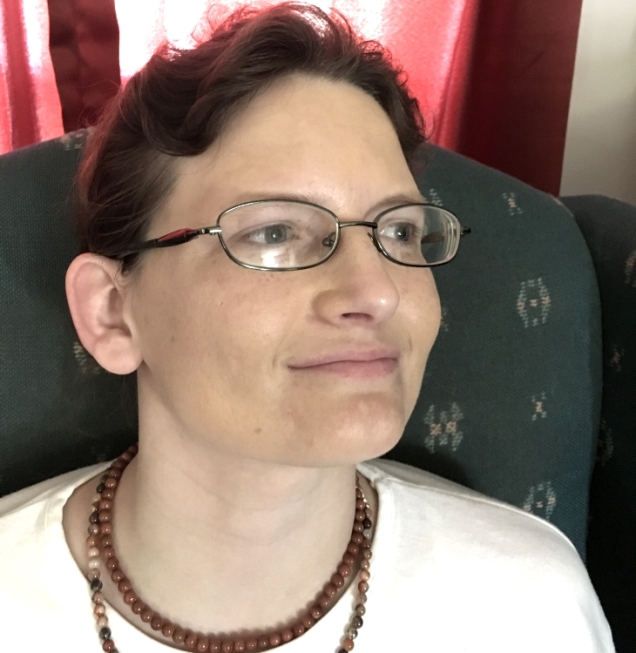 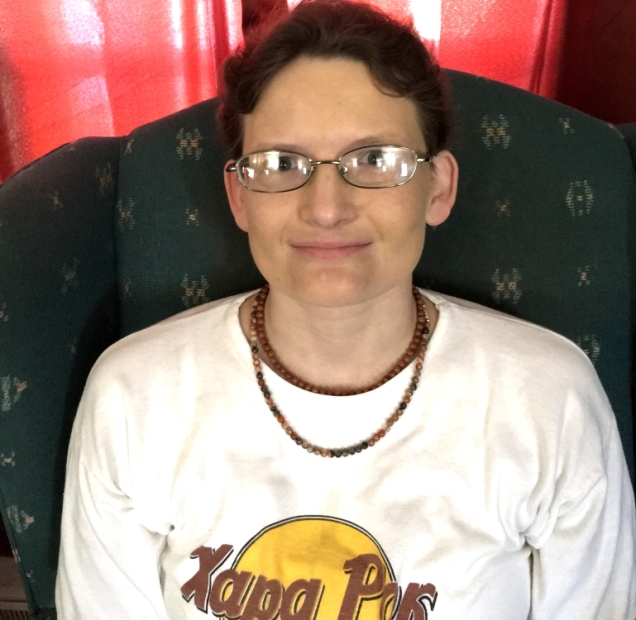 And here’s a selfie I took in the car right after the makeup application. My hair’s a bit fluffled because of the wind.

I think this looks much better, and you can’t even really tell I’m wearing makeup. If you look closely you can still see a little discoloration around my mouth still, but I don’t think it’s so much that people are going to notice it, and maybe if I put the makeup on a little heavier it will go away entirely. Michael thinks it looks great too. (I’m open to tips about concealing the melasma, by the way, or about applying makeup in general. Feel free to expound in the comments section.)

(And we’ll see if whats-their-name comments again saying I look like an old hag and my clothes are “tacky” and my hair is messy.)

I don’t think I will use makeup every day — it’s so expensive and I want to make it last — but I’m amazed at how much prettier and self confident I feel. Who knows what will be next — lipstick? Blush? Zounds.

Anyway, enough about me. That’s all.