Got an email today from a self-professed psychic who claims she knows, through her “visions,” where a missing child (very cold case) is. I’ve often complained about what a waste of time it is when people send me tips that should go to law enforcement. But I’ve never got a tip from a psychic before.

For future reference, if you hadn’t guessed already, I don’t believe in ESP and put no stock whatsoever in psychic visions. I think some of them genuinely believe they have a gift but most of them are just opportunists who prey on people’s anxieties and hopes.

You can see loads of pictures from the event here. Regarding ones relevant to me:

Setting up my table. My dad is the man on the left.

Me and dad with the SAR lady and her dog.

Me at my table. I was setting up and took a break for this photo. Annnd here’s one more:

Witness the tablets propped up on rocks.

And there are loads more photos on the Facebook page. Check it out!

This week’s is Kazimierz Krystian Kazmierski, last seen in San Bruno, a town on the coast of central California, on September 1, 1992. He was 29 years old. Beyond that I have nothing on him; it’s one of my “few details are available” cases. I think his name is pretty unfortunate though. Both because the first and last name are almost identical and because of the initials KKK.

I got an email from someone who has a friend who disappeared in Panama. They understand that I can’t put that MP on Charley, but wanted to know if I had any ideas as to what resources there were out there.

I don’t know how to answer this person. Any ideas?

I got back really late last night, after midnight. I was pretty beat, seeing as how the previous night I’d awakened at 2:00 a.m. and wasn’t able to go back to sleep.

It went really well. The event was well-organized and well-attended. When I showed up, Marsha (the organizer) surprised me with my own table. I was a bit embarrassed because I didn’t recall us agreeing on me getting a table and I had nothing to put on it. Fortunately Marsha had already thought of that and she gave me some stuff to put on the table. I was between the table about search and rescue dogs and the table selling lockets and stuff, across the aisle from Gene Cloud‘s family.

The SAR people, by the way, showed up with two of their dogs, a Belgian Shepherd and a Golden Retriever. I asked if a dog had to be a certain breed to become an SAR and they said no, some breeds tended to have better noses than others but it really depended on the individual dog. One of the ladies told me about an SAR dog she knows of that’s a Papillon. I would be kind of embarrassed if I got lost and had to be rescued by a dog the size of a fluffy slipper, but beggars can’t be choosers I suppose.

I took the time to snag one of the event’s t-shirts to wear. You can see it in this selfie: 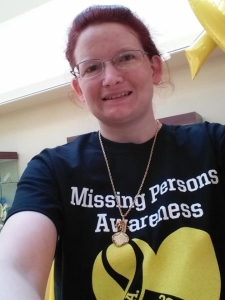 Dad and I decided to set up our tablets so visitors could see the Charley Project and its Facebook page. We had no tablet stands and for awhile we kept improvising with bits of bitumen and wood, but that just got everything dirty and then the sun started shining directly on the tablets so you couldn’t see anything anyway. It was kind of funny actually.

At one point Amber Wilde‘s mom and sister and niece came over and asked if I was the person behind the Charley Project. I confirmed I was and they said, “Thank you.” Oh, and her last name is pronounced Wil-deh. All this time I’ve been saying it like Wild. A cop also stopped by my table and asked what I was and what I did. I explained about how the Charley Project takes all the publicly available info and puts it in one place and how as far as I know, no one else does that, and she seemed impressed and said something to the effect that I did what the cops could not do.

Everything went really awesomely from my subjective point of view, except for at the end when we released balloons that had the names of MPs attached to them. That was kind of a comedy of errors. First we went out to the balcony and waited, then it turned out we were actually supposed to have gone to the parking lot, so we trooped down to the parking lot and released the balloons…90% of which were promptly blown into a nearby copse of trees and got stuck or popped. Only a few lucky balloons escaped. Stupid wind! Then when we went to go back into the building it turned out we were locked out and someone had to let us in.

Dad and I hit the road a short time after that, and had an uneventful trip home. I pretty much hit the mattress as soon as I made it back.

Thanks for inviting me, Marsha! Glad I went!

These MPs all had an arm or leg that was shorter than the other one.

This week’s selection is by B.: Arkadiy Tashman, a Russian immigrant skater boy who vanished under very mysterious circumstances ten years ago in January. He left behind a very distressing note: “Sorry about this. No wake, no funeral.” But if Arkadiy took his own life, where’s the body?

What’s, in a way, even more distressing than that note, is something noted in his casefile: “His parents notified police immediately [after finding the note], but for unknown reasons authorities did not begin an official search for Arkadiy for six days.”

Note nevertheless, his family doesn’t believe he committed suicide. I hope not. In situations like this families are often the last people to know when a person is in that kind of condition.

So tomorrow Dad and I are driving to Green Bay, Wisconsin for this missing persons conference I’ve been invited to. If anyone else is interested in going, here’s the deets: It’s at Heritage Hill State Park at 2640 South Webster Avenue between 1:00 and 4:00 p.m. on Sunday.

And, distressingly, I can’t find my Charley Project sweatshirt ANYWHERE.

Not too long ago Charley added the case of Delores Gonzales, a seventeen-year-old girl — married and a mother of two, in spite of her youth — who vanished in 1973 from Gulfport, Mississippi. Well, now we know what happened to her: her husband murdered her and dumped her body in Alabama, where it was located but remained unidentified for forty years.

“Detectives found her remains in 1974 with two gunshots to the skull,” Walker said. “The murder investigation is still open, but at least we could get the family this bit of closure.”

The investigation restarted in 2012 when Jason Kokoszka was taking inventory before the Alabama Department of Forensic Science moved to a new building.

“He found the remains and realized DNA testing had never been done,” Walker said. “After that, he sent the remains to numerous locations for every DNA test possible.”

They’re pretty sure they know who did it to her: her husband, Robert Lane Gonzales. Unfortunately, Mr. Gonzales died in Florida years ago. He got away with murder.

This week’s Flashback Friday case is Paula Ann Pope, who disappeared nine days before her 19th birthday in 1972. Paula and her husband were staying at a California campground and she wanted to see a rock concert in Nevada and they got into an argument because he couldn’t go with her. (From what I recall, he couldn’t leave the state because he was on parole or probation or something, though I didn’t say that in the casefile.) Paula went stomping off and never returned.

It’s kind of up in the air what happened to her, I guess. Last seen talking to “motorcycle types.” I suppose it’s not inconceivable that she left on her own, but it seems unlikely, especially after all this time. It’ll have been 42 years in September. Paula would now be 61 years old.

My Tweets
The Charley Project Blog