For your edification, here’s a list of all the memoirs I can find that were written by victims of kidnapping. A lot of them are “by [kidnap victim] with [ghostwriter]” but I decided that counted. I also decided to include books by people whose kidnappings wouldn’t have wound up on Charley — like victims of terrorists.

The Birthday Party: A Memoir of Survival by Stanley M. Alpert
Buried Memories: Katie Beers’ Story by Katie Beers
Anatomy of a Kidnapping: A Doctor’s Story by Steven L. Berk
Even Silence Has an End: My Six Years of Captivity in the Colombian Jungle by Ingrid Betancourt
Price of Life by Nigel Brennan
I Choose to Live by Sabine Dardenne
A Stolen Life: A Memoir by Jaycee Dugard
Memoir of a Milk Carton Kid by Tanya Nicole Kach
Kidnapped: A Diary of My 373 Days in Captivity by Leszli Kalli
3,096 Days in Captivity: The True Story of My Abduction, Eight Years of Enslavement, and Escape by Natascha Kampusch
Finding Me: A Decade of Darkness, a Life Reclaimed: A Memoir of the Cleveland Kidnappings by Michelle Knight
Abducted by Charlene Lunnon and Lisa Hoodless
Scarred: A Memoir by George Mohlo
Kidnapped In Yemen: One Woman’s Amazing Escape from Terrorist Captivity by Mary Quin
Shattered: Reclaiming a Life Torn Apart by Violence by Debra Puglisi Sharp
My Story by Elizabeth Smart
Deliver Us From Evil: The True Story of Mexico’s Most Famous Kidnapping by Ernestina Sodi

Of these, I’ve only read Michelle Knight’s and Sabine Dardenne’s books. Someone mailed me a copy of the Jaycee Dugard book yonks ago, but it’s still sitting on my shelf unread because I am a lazy, ungrateful person.

I haven’t updated in the last few days, partly because Michael and I have both been sick (throat infection, taking antibiotics) and partly because I had to read the book about Susan Powell and also Michelle Knight’s memoir by today because I had to give them back to the library. Well, I managed to finish both in time and will thus avoid the fine.

Michelle’s memoir is called Finding Me: A Decade of Darkness, a Life Reclaimed: A Memoir of the Cleveland Kidnappings. It says “by Michelle Knight with Michelle Burford” but I’m pretty sure Burford (described on her website as a “ghostwriter and story surgeon”) was the true author.

Not that it much matters: the more important thing is the quality of the book itself and that, I’m happy to say, is spot-on. I finished this story much more quickly than I did the Susan Powell book, moving at a fast clip (and not just because I was on a deadline). The story covers Michelle Knight’s sad childhood and adolescence in detail but without taking up too much page space, since the book is supposed to be about her ordeal with Ariel Castro. The descriptions of what she went through after the kidnapping were vivid and harrowing, but no more so than they needed to be.

In conclusion, I highly recommend this book to anyone interested in MPs. Even those who are not involved in the missing persons world, or even big true crime fans, would enjoy it.

Computer Guru Jamie has put together a quote for how much my snazzy new desktop will cost: $940.53. Which is just peachy with me. Click on the image for details. 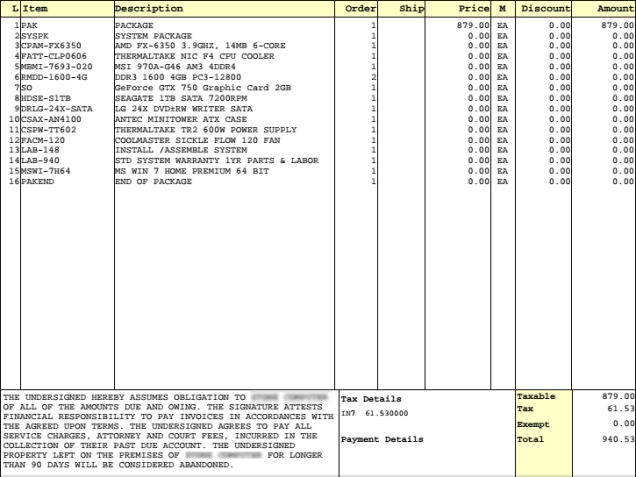 I come from a large family. My mother had seven children altogether (five boys, two girls) and would have had more if she could have. I’m the youngest and I’m pretty sure I won’t have kids of my own, for health reasons mainly. Of the six above me, one has died, one has yet to reproduce and the other four have got ten offspring between them.

I thought I’d make a list of missing women who had five or more children. This list is certainly incomplete, because a lot of times I just don’t know how many kids a woman has. But I’m giving it my best shot.