One of my rats, Harriet, is dying. She’s been sick with the sniffles the last few days and in the last eighteen hours or so it’s gotten a lot worse. Her breathing seems to be okay but she’s too weak to move. She’s also lost a lot of grams — so bony in comparison to her sisters. I think it’s just her time. She’s kind of old — two and a half, almost three.

Of course, Labor Day Weekend is not a good time to get sick, for either rat or human. If she lives through the night (and I’m not sure she will) I’ll probably take her to the vet tomorrow to get put down. She’s a good little girl and I don’t want to prolong this.

In the meantime she’s with me, wrapped up in blankets, and I keep stroking her tiny head. 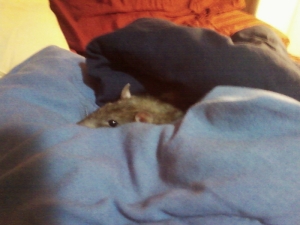 This article that mentions the Charley Project is about the disappearance of Eric Wayne Pyles, who disappeared from Pennsylvania almost twelve years ago. Its kind of a strange case.

Anyway, the article says, “The nonprofit National Center for Missing and Exploited Children, missingkids.com, and the independent group, The Charley Project charleyproject.org, both have profiles of Pyles on their websites.” With actual clickable links there.

Which is nice, but I wish the news people would stop calling me a “group” or an “organization” or any of a number of incorrect appellations. I prefer to just call Charley a “missing persons database.”

Charley was also mentioned in this Washington Examiner article (I’m showing the cache of it, since the original link doesn’t work anymore) about Sherry Walker, who disappeared from Alexandria, VA in 2003. She had schizophrenia and had talked about checking herself into a hospital, so when she vanished, her neighbors thought she’d done just that and weren’t worried. The article quotes me saying she “had a habit of dropping out of sight.”

For no particular reason, tonight I remembered a poem I wrote seven years ago — and I haven’t written a poem since. It was about Ronald Cole, who disappeared in 1965. The single photo I have of him is of very poor quality, and at the time I wrote the poem I had nothing on his disappearance either; just what it said in the CA-DOJ casefile. Now I know a bit more.

Anyway, I wrote the poem not just for Ronald but for all those long-missing people for whom “few details are available.” And I’ve never shared it with you.

Who are you? Who were you?
Surely, you were something more
Than that grainy, gray photograph
Height, weight, hair, eyes
Date of birth, distinguishing marks

A statistic, one of many
In a list of names and faces
A single, sterile sentence
From faded, fusty folder
That was thrown out long ago

You melted in the springtime
As the world bloomed around you
An epilogue, an afterthought
Amid all those green and growing things
And all those people who still exist

No six-column headlines or six o’clock news stories
Just “unknown circumstances”
And six-one, one-forty, brown hair and hazel eyes
And that scar on your cheek
All filed in a folder long since lost, like you

Out into nowhere, an ocean of emptiness
A black hole, a vacuum, a void
Gone, your essence dissipated
From this world of documented people
Whose existence remains a fact

I got an email a few days ago regarding a case, a family abduction with two siblings. They were abducted by their non-custodial mother. The writer said she was a “friend” of the mother and said before I profiled such cases, I ought to research them, and if I had, I would have found out that the father was a pedophile and abused the children horribly, etc., and the courts wouldn’t listen to the mother and when the father got custody, she was “forced” to abduct the children to “save” them and now they were being returned to their “abuser” and their lives were ruined and sites like mine were not helping etc.

As far as it goes, the email was pretty tame — sometimes I get emails like that which are full of shouting and say nasty things about me. This email was polite. I’m sure the woman really believes what she says.

I did research the case before I posted it. I research all my cases as well as I can. I knew about the sex abuse allegations. Now, some abuse investigations are closed for lack of evidence — meaning that abuse could not be PROVEN — and some are ruled unfounded — meaning that the social workers were convinced the abuse DID NOT HAPPEN. In this case, the complaint was ruled unfounded. So not only was there no evidence of sex abuse, there was apparently some evidence that convinced CPS that the mother was lying.

The mother had custody of the children at the time and the father had visitation. When the complaint was ruled unfounded, the judge, of course, refused to interfere with the father’s visitation rights and ruled that he should have the same access as he had before. At which point Mom outright refused to let Dad see the kids at all. In response, the court took custody away from her and gave it to Dad. That’s when Mom abducted the boys. They were gone for over three years.

Now, I’m not in a position to know whether the sex abuse allegations were true. But for me, what matters is that the children were missing. I’m not going to refuse to put missing children on Charley just because the abductor claims their actions were justified. Every person who breaks the law tries to justify it, if only to themselves. Let’s say someone robs a bank — would people be going around saying, “Don’t go around posting Wanted Posters about the robber; he had a family to support and his house was about to be foreclosed on”? They would be laughed at if they said such things. Why should kidnapping be any different? Yet, when it comes to parental abductions — especially when the abductor is the mother — a lot of people seem to see them as exceptions.

Not in my eyes. Mom broke the law. She committed a felony, and she forced her two children to live as fugitives for years, and she robbed them of access to their father and their father’s family. I don’t know what their lives were like while they were missing, but there’s a good chance they weren’t in school, didn’t have adequate medical care, and had to move around frequently. It’s not a nice life. My good friend Annie Keller has a list of children whose lives were particularly blighted by parental abduction (some of them were even killed) and her latest addition mentions a child who, missing for eighteen months, was unable to do basic math or even read a clock after he was located.

I don’t know what Mom’s “friend” expects me to do, but I will not apologize for doing my part to help find those kids, nor will I remove their names from Charley.