I found a packet of photographs Michael took of me when I was sixteen or seventeen, and thought I’d post them on here:

Me on the boat going either to or from my parents’ lake house.

Me with my mother, a friend and my friend’s daughter, on the deck of the lake house. From my clothing and the weather I would guess it was taken on the same date as Picture #1. 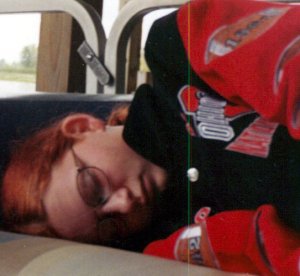 Me on the boat again, either asleep or just trying to shelter from the wind. I think this was taken on a different date, since my hair appears to be parted differently.

You all know that I try very hard to keep Charley as accurate as I can, but it’s extremely difficult when I get diametrically contradicting information from my various sources.

Got an email from a guy who had Googled an old classmate’s name and, to his horror, discovered she’s been missing for two and a half years. He said that back in the day, he had wanted to marry her. That wasn’t why he was writing me, though. He wanted to tell me her date of birth was off by seven or eight years. If the DOB I have on Charley is correct, she would be 43. This man is 50 and says she was the same age. I went and double-checked the source I got the DOB from, and I had copied it correctly. I discovered the woman is now on NamUs, and NamUs says her present age is 49 — that is, supporting the old classmate’s statement. I’m not going to quibble over one year or less. If the month and day of birth are correct and only the year is wrong, she’s 49 and a half.

*gives a weary sigh* Obviously somebody screwed up here. I’m inclined to believe the old classmate — if he was close enough to this person to want to marry her, he was close enough to know her approximate age, and if they were in the same class at school they were probably the same age like he says. Six years is a pretty huge difference in age when you’re in high school. But the only source that actually provides a DOB, says otherwise.